Alabama Rot in dogs: what is it and how to prevent it 2 min read

The tabloid press are calling it ‘the dogs’ black death’ – but what are the facts about Alabama Rot, and how can you stop your dog from getting it?

How to keep your dog safe

Known cases in the UK

What is Alabama Rot?

Also known as cutaneous and renal glomerular vasculopathy (CRGV), Alabama Rot is a serious, often fatal condition that’s becoming more and more common in the UK. It affects dogs of any age, size and breed.

Alabama Rot causes damage to the blood vessels of the skin and kidneys, which leads to tissue death and organ failure.

The condition originally made its way to the UK from the US in the mid-1980s, where it was first spotted in Greyhounds at racetracks in Alabama. While the disease has all but died out in the US, it’s become a bigger problem in the UK.

Is my dog at risk?

Due to the unforgiving nature of the disease, however, it’s vital that dog owners are able to recognise its symptoms.

Signs and symptoms of Alabama Rot in dogs

The disease causes oozing, open sores to appear on the skin, most commonly of the lower leg. These sores appear as red, ulcer-like patches.

How to keep my dog safe?

Experts are yet to pinpoint the cause of Alabama Rot, and there’s no vaccination against it.

As an owner, your best course of action is to remain vigilant, and to contact your vet immediately if you spot any unexplained sores or lesions on your dog’s skin. Washing your dog's paws and legs after muddy walks can also help - many believe that dogs pick up Alabama Rot on their paws and legs when running through mud. If you're walking on a wet or rainy day, do your utmost to stay on clean, dry land wherever possible.

The earlier Alabama Rot is caught, the higher your dog's chances of making a good recovery. 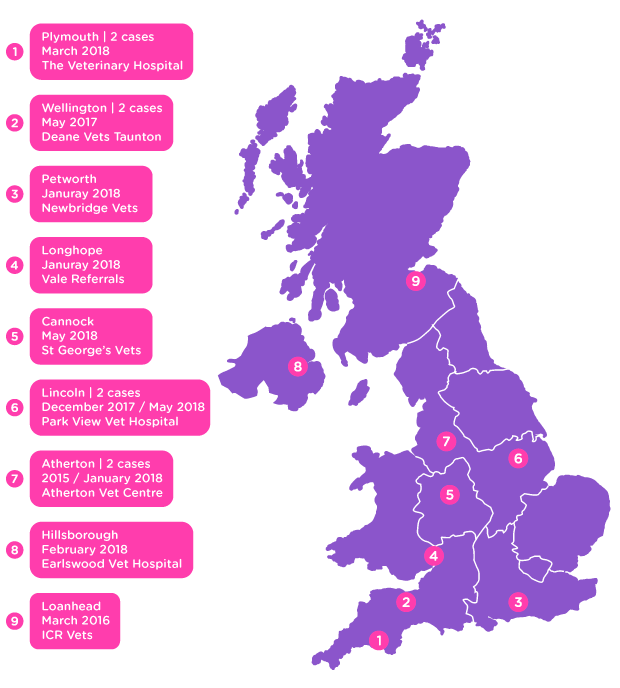 For more information on Alabama Rot in dogs, contact your local vet. To find your nearest recommended vet or pet clinic, use our Find a Vet page.

Flystrike in rabbits: how to care for your rabbits and avoid fly strike