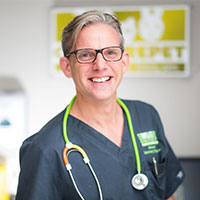 Edward is Clinical Director and founder of CheshirePet in Holmes Chapel (Cheshire).

He has working English Springer Spaniels, Archie and Tilly, as well as three cats. Three teenage daughters are also added to the mix. He enjoys cycling and running, a highlight was running the London Marathon in 2017.

Brachycephalic or 'brachy' dogs, such as English and French Bulldogs, are more prone to breathing difficulties than other breeds.

Let’s look at the causes and symptoms of breathing problems in brachycephalic dogs, and at what you can do to help your furry friend.

How can the vet help?

How can owners help?

Put simply, brachycephaly is a term used to describe a skull shorter than average for its species. Brachycephalic dogs are simply dogs with short snouts and/or flat faces.

Breathing problems are among the most common health issues associated with French Bulldogs and other brachycephalic dogs (Chihuahuas, Pugs and Boston Terriers). This is mainly because of their short noses; the anatomy of their face is ‘squished’ and this puts pressure on their respiratory system.

These breathing problems are known collectively as Brachycephalic Obstructive Airway Syndrome (BOAS), and can be broken up into two main categories: primary conditions, that the dogs are born with, and secondary conditions that occur over time, often as a consequence of primary conditions.

Brachycephalic Obstructive Airway Syndrome usually affects young to middle-aged dogs but this is because most brachycephalic dogs will need surgery before they get to middle age. Un-treated older dogs, overweight dogs and dogs with pre-existing health problems are particularly at risk.

Treatments: how can I help my brachycephalic dog?

Health issues such as breathing problems are common in short-nosed breeds like Bulldogs and Pugs, so we advise owners to pay close attention to their dog’s breathing. If you notice that your dog is struggling to breathe, contact your vet right away.

Veterinary treatment will differ depending on the seriousness of the dog’s condition but common procedures include widening of the nostrils and shortening of the soft palate so the dog can take in oxygen more easily. In extreme situations, the vet may need to use a tube to aid the dog’s breathing.

Because these conditions can escalate so quickly, it’s important to contact your vet sooner rather than later.

How can the owner help?

The best way to handle Canine Brachycephaly is to stay aware of it, to know the symptoms you’re looking for and not to shy away from visiting the vets. People often think that noisy or difficulty breathing is normal for these dogs – this is not the case, it could be your pet asking for help.

One other action you can take is to keep your dog’s exercise nice and gentle –this is especially important during hot weather.

For more information on breathing problems in brachycephalic dogs, contact your vet. To find your nearest recommended vet or pet clinic, use our Find a Vet page.

Breathing problems in dogs: why is my dog panting?

Top tips to keep your dog cool in summer