Dog in heat! A guide to your dog’s first season 3 min read 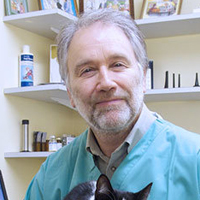 John is Clinical Director at Oakfield Vet Group in Atherstone.

He has a special interest in soft tissue surgery, diabetic control and orthopaedic work.

John lives in Berkswell and has three rescued pets of his own: a labrador called Mollie, a collie called Briar and a cat called Ron.

A dog’s first season can be a messy and turbulent time for pets and owners alike but if you’ve decided not to neuter your bitch or if you plan to breed from her in the future, it’s an inevitable stage to be gotten through.

Let’s take a closer look at the dog heat cycle, understanding your bitch’s first season and how to make life easier for her during this time.

How long does a dog’s season last?

How long does a dog in heat bleed?

Signs of a dog in heat

Dog heat cycle: the stages of a bitch’s season

An un-neutered female dog will usually come into her first season at around 6 months old, although smaller breeds can come into season earlier and larger breeds a while later (sometimes not until they’re 12 months old).

From then on, she’ll have a season roughly every 6 months.

How long are dogs in heat – is it a lifetime thing?

Unlike humans, female dogs can go into heat throughout their lives – although the length of time between seasons will increase as they get older.

How long does a dog's season last?

The typical heat cycle will last between 2 and 4 weeks.

The bitch will be fertile during this entire time but there is a small period, 9-10 days into the cycle, where they are especially fertile. Bitches may not be receptive towards male dogs during the first few days of their cycle but this varies from dog to dog.

How long does a dog in heat bleed?

Bitches usually bleed during the pro-oestrus period – where the body essentially gets itself ready for the season or ‘oestrus’ period. This occurs 7-10 days before she comes into season and usually stops once the oestrus period has begun, although this isn’t the case for all.

If you’re concerned about your bitch and her pro-oestrus cycle, have a chat with your vet.

Signs of a dog in heat: clinical and behavioural

Bleeding isn’t the only sign that your dog has come into heat. You can usually tell a bitch is coming into season from other signs such as:

Will my dog’s behaviour change when she’s in heat?

Dogs in heat tend to be more receptive to company. They might display sexual behaviour: mounting other dogs, your furniture or your leg, for example. Some bitches may become more domineering or commanding during their season; others may appear anxious and display maternal characteristics such as gathering toys in her bed or sleeping area.

A dog in heat is essentially sending pheromones out to the male dogs in the area, so she’ll be getting her fair share of attention! If you have other dogs in your house, it’s a good idea to separate them at night and when you leave the room – consider a baby gate if you don’t already have one.

When walking, keep your bitch on the lead. Aim to walk during quieter times of the day, avoiding other dogs where possible. Don’t let her outside on her own and give any dog socialising classes a miss until the season is over.

Spend some quality time with your dog

She’ll be feeling confused during her season so keep her reassured with lots of cuddles and quality time. You’ll naturally be exercising her outside less so if your bitch is restless, keep her mind occupied with some indoor games.

Menthol on the tip of the tail

This may help to cover the scent – especially useful if you have other dogs at home.

These are lifesavers when your dog is in season. If she really doesn’t like wearing pants, keep her somewhere with a laminate floor or a surface that’s easy to clean blood/discharge from!

Not planning to breed from your dog?

It’s a good idea to have your dog neutered. This will eliminate the risk of unwanted pregnancies and free both you and your pet from the hassle associated with their season. Find out more about neutering.

If you need more advice about your dog’s season, neutering or any other aspect of their welfare, have a chat with your vet. To find your nearest recommended vet or pet clinic, use our Find a Vet page.

Is your female cat in heat? How to tell and how to help

Bringing home a new puppy: how to introduce a dog to your home